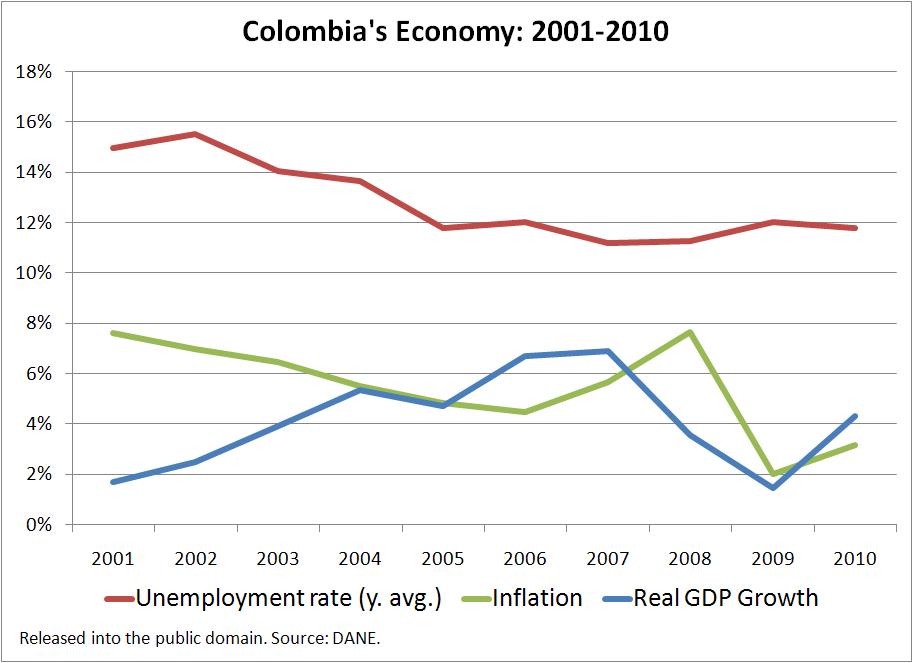 Graph with the Colombian Unemployment rate, inflation rate and real GDP Growth for 2001 – 2010. The information source is DANE, the Colombian National Statistics Agency.

Gold is important to Columba because without the gold it takes away the way people live.  According to the article in Colombia In Colombia, digging for gold comes at a price it states the residents depends on the gold for generations to do their work. Gold has long been so much a part of the lifeblood that it is used in place of the Colombian peso as currency. Families pay off their credit at the corner store with grams of gold, or take a gold nugget to buy provisions at towns downriver. To stop the flow of gold profits into the hands of criminal groups, the government has declared fighting illegal mining a priority, sweeping up traditional miners in its offensive. “They’ve labeled us as illegal,” said Mauricio Sánchez of Aheramigua, the association of farmers and miners of the Guamaco region.

Brazil, officially known as Federative Republic of Brazil, is the largest country in South America and the fifth largest country in the world both by geographical area and population. Brazil is located on the east coast of South America, bounded by the Atlantic Ocean with a coastline of 7491km and with a population of 192 million. Brazil was first set as a colony of Portugal from 1500 to 1815, then the united kingdom of Portugal, Brazil and the Algarves formed. The bond of colony was broken in 1808, and independence is finally achieved in 1822 when the Empire of Brazil erected. In 1889, Brazil was changed into a presidential republic. Later, which is actually about 100 years in 1988, the constitution of Brazil defines the country as Federal Republic.

Brazil can be divided into four major geographic regions. The long, narrow Atlantic seaboard has coastal ranges between the Rio Grande do Sul and Bahia, but is flatter north of Bahia. The large highlands – called the Planalto Brasileiro, or central plateau – which extend over most of Brazil’s interior south of the Amazon Basin are punctuated by several small mountain ranges and sliced by several large rivers. There are also two great depressions: the Parana-Paragui basin in the south, which is characterized by open forest, low woods and scrubland; and the huge, densely forested Amazon basin in the north. The Amazon, 6275km long, is the world’s largest river, and the Amazon forest contains 30% of the world’s remaining forest.

The richness and diversity of Brazil’s fauna – much of which is endemic – is astounding, and the country ranks first in the world for numbers of species of mammals, freshwater fish and plants; second for amphibians, third for bird species; and fifth for species of reptiles. Despite its natural riches, Brazil is renowned for the destruction of its environment. All of Brazil’s major ecosystems are threatened, not just the well-known Amazonia. Many species are under threat because of the continued depletion of rainforests, desertification in the northeast, poaching in the Pantanal region and coastal pollution.

In 2011, 36 Brazilian companies were listed in the Forbes Global 2000 list – an annual ranking of the top 2000 public companies in the world by Forbes magazine.[29] The 13 leading companies were:

Major industries include iron and steel production, automobile assembly, petroleum processing, chemicals production, and cement making; technologically based industries have been the most dynamic in recent years, but have not outpaced traditional industries. Peak industrial growth was achieved in 1973, when the manufacturing sector grew by 15.8%; growth rates averaging about 7% were posted during 1978–80, rising to 8.3% in 1985 and 11.3% in 1986. Growth slowed significantly during the 1990s. According to the Brazilian Statistical Institute (IBGE), manufacturing rose an annual average of only 0.7% between 1988 and 1998. Manufacturing expanded from 2.6% growth in the third quarter of 2002 to 6.6% in the fourth quarter. Growth in 2002 was particularly pronounced in the construction industry.

In 1969, 3.7 million tons of crude steel were produced; by 1985, this had reached 20.5 million tons; and by 1998 the total output of processed ore was 190 million tons. Domestic production exceeds domestic needs. Vast reserves of accessible, high-grade ore, plus a rapidly expanding domestic demand for these products, favor continued expansion of the steel industry. The major negative factor is lack of domestic soft coal. Companhia Vale do Rio Doce (CVRD) is the largest Brazilian mining company, responsible for nearly 23% of the mineral output of the country.

Motor vehicle production, Brazil’s industrial backbone, experienced a drop of nearly 27% from 1998 to 1999 because of the country’s financial difficulties. Production of automobiles went from about two million units in 1997, down to 1.6 million units in 1998. In 2001, Brazil produced 1,798,472 automobiles, an increase of 7% over 2000. In 2000, the country produced 70,304 heavy trucks, an increase of 27% over 1999. The automobile industry is expanding rapidly with major sources of foreign investment and the construction of new manufacturing plants.

Brazil mines and refines petroleum products. The country in 2002 had 13 oil refineries with a total production capacity of 1,786,000 barrels per day. Because of increased domestic refining capacity during the 1970s, imports of petroleum products were less needed, and by 1979, Brazil was a net exporter of petroleum derivatives. In 1998, Brazil only imported 50% of its petroleum. Brazil’s petrochemical industry emphasizes the production of synthetic rubber at Petrobrás’ synthetic rubber plant. There are also over 500 pharmaceutical laboratories and plants in Brazil, the majority in São Paulo. Over 80% of the industry is foreign-owned. Increased construction demands boosted Brazil’s cement production during the 1980s and 1990s. Brazil’s electrical equipment industry manufactures computers, television sets, transistor radios, refrigerators, air conditioners, and many other appliances. Brazil has the largest textile industry in South America in terms of installed capacity and output, with nearly half of the spindles and looms in operation on the continent. The Brazilian pulp and paper sector is also large, consisting of more than 220 companies, which together employ approximately 80,000 people in industrial operations, as well as another 57,000 in forestry work and operations. The pulp and paper sector is almost fully privately-owned. The government allowed foreign investment in vital industries since 1995, and supports the sale of any residual parastatal enterprises. 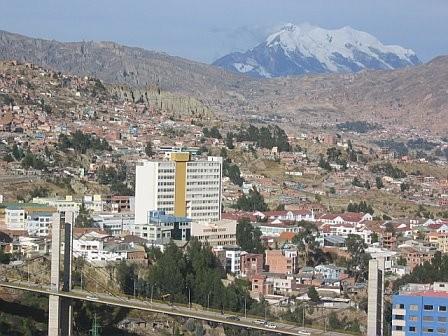 Bolivia took on its name after Simon Bolivar who was a fighter for independence. In the year of 1825, Bolivia gained its independence and broke away from Spanish rule.  Bolivia established democratic civilian rule in 1982 but leaders of the country has had difficulty with poverty, social unrest and illegal drug production. Elected in 2005 as president, Evo Morales promised change to Bolivia’s political class and to empower the country’s poor, indigenous majority.  His ideas for changed raised racial and economical conflict between the Amerindian population of the west and the non-indigenous communities of the eastern lower lands. In December of 2009 however, Morales was reelected, his party took total control of the legislative branch of their government in which Morales is still continuing his process of change.

The capital of Bolvia s La Paz and the government type in Bolivia is republic. The legal system in Bolivia is a civil law system which is influence by Roman, Spanish, canon, French and indigenous law. The laws and regulations in Bolivia are religious based also. President Morales is the both the chief of state and the head of government.

Bolivia happens to be one of the poorest and least developed countries in Latin America. Bolivia experienced an economic crisis which was very disastrous in the 1980s and following that, reforms spurred private investment , stimulated economic growth and cut poverty rates in the 1990s. From 2003-2005 racial tensions aroused and violent protests occurred against plans to export Bolivia’s new found natural gas reserves in order to expand northern hemisphere markets. Compared to the world,natural gas production in Bolivia is placed 34th and natural gas consumption is placed 73rd Also, oil production in Bolivia is placed 61st and oil consumption is placed 93rd.

The Economic score of Venezuela is 38.1, as of right now.  As you can see in the chart above their  Regulatory Efficiency. of Labor Freedom is 36.0 and is still going up! . Financial score is 20.0. 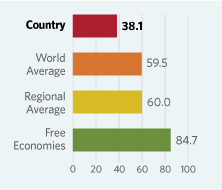 Chile’s economy is based on the export of minerals, which account for about half of the total value of exports. Copper is the nation’s most valuable resource, and Chile is the world’s largest producer. Agriculture is the main occupation of about 15% of the population; it accounts for about 6% of the national wealth, and produces less than half of the domestic needs. The Vale of Chile is the country’s primary agricultural area; its vineyards are the basis of Chile’s wine industry. Grapes, apples, pears, onions, wheat, corn, oats, peaches, garlic, asparagus, and beans are the chief crops. Livestock production includes beef and poultry. Sheep raising is the chief pastoral occupation, providing wool and meat for domestic use and for export. Fishing and lumbering are also important economic activities. Chile’s industries largely process its raw materials and manufacture various consumer goods. The major products are copper and other minerals, processed food, fish meal, iron and steel, wood and wood products, transportation equipment, and textiles.

The dependence of the economy on copper prices and the production of an adequate food supply are two of Chile’s major economic problems. Chile’s main imports are petroleum and petroleum products, chemicals, electrical and telecommunications equipment, industrial machinery, vehicles, and natural gas. In addition to minerals, it also exports fruit, fish and fish products, paper and pulp, chemicals, and wine. The chief trading partners are the United States, China, Brazil, Argentina, and South Korea.

The country’s gross domestic product gained 4.5% on the year in the fourth quarter, bringing the increase for the full year to 6%.

Fourth-quarter GDP rose 2% from the third quarter, according to the central bank. It also rose 8.2% on an annualized basis in the fourth quarter.

On a seasonally adjusted basis, GDP grew by 5.9% in 2011 compared with the previous year.

It also reported that in the third quarter of 2011, GDP grew 0.3% from the previous quarter and that for the second quarter of last year, it grew 1.0% from the first quarter.

“The GDP was fueled by all economic sectors, with the exception of the mining sector, which posted a contraction,” the central bank said.

The bank noted that retail commerce, construction and personal services were the sectors that contributed significantly to last year’s economic growth.

Domestic demand grew 9.4% on the year in 2011, fueled by an 8.8% on-year increase in household consumption of goods and services and a 3.9% gain in government demand and to a lesser degree by investment, according to the bank.

Gross fixed capital formation, a measure of investment, grew 17.6% on the year due to a 12.7% increase in construction spending and a 25.8% jump in spending on machinery and equipment, the bank said.

The mining sector, which has traditionally fueled growth in Chile and which represents about 16% of GDP according to the central bank, retreated 4.8% on the year in 2011, due to lower copper production caused by falling ore grades and labor strikes.

In addition, Chile posted a current-account deficit of $3.22 billion for the year, equivalent to 1.3% of GDP, the bank said.

The GDP data released Monday incorporated revisions to the methodology the bank uses to calculate GDP, as it adopted new international standards.

The central bank changed the base year for GDP, introducing a chain index base rather than a fixed base, and modified the weightings of different economic sectors, among other changes that follow standards used by other countries belonging to the Organization for Economic Cooperation and Development, or OECD.

“This methodology allows us to get closer to the [economic] reality and not be tied down to the prices of one particular year,” said Ricardo Vicuna, who heads the central bank’s statistics division.