In the next few decades, India, the world’s second most populous country is expected to surpass China in population. By 2040, India’s population is expected to be 1.52 billion; that same year, China’s will be 1.45 billion and India will become the world’s most populous country. As of 2005, India has a total fertility rate of 2.8, well above replacement value, so it is growing much more quickly than China.
d a decrease in infant mortality and a decrease in death rate as national health improves.
China’s one child policy was established by Chinese leader Deng Xiaoping in 1979 to limit communist China’s population growth. Although designated a “temporary measure,” it continues until 2012 The policy limits couples to one child. Fines, pressures to abort a pregnancy, and even forced sterilization if it happened more than once.

The East Asian Bureau of Economic Research is a forum for high-quality economic research focussing on issues facing the economies of East Asia. It comprises representatives from Japan, China, South Korea, Vietnam, Cambodia, Laos, Thailand, Malaysia, the Philippines, Indonesia and Australia. The rapid development of the East Asian economies, the growth of intra-regional trade, financial and other economic interaction, and East Asia’s new role in the global economy all underline the need for access to a vastly increased range of quality economic analysis on East Asia.

In Japan they have a government called the Hatoyama that came into play last September. The biggest change that took effect is the type of government they have. They have what is called a transparent government. Before, Japanese democracy was corrupted because the authorities in Tokyo did not want to trust the public with information about how tax revenue was being spent and who was making national policy. They had a press that didn’t reveal full stories about what was really going on in the state of their nation as well as they didn’t bother to search hard for stories. Most times, the more interesting stories are the ones that are heavily covered

The rapid growth of cellphones has made a deficit in India’s agriculture.

With the rise of financial crises and financial bouta all over the nation, Asian countries want to join together to avoid this. They want to try something called “Global Monetary Cooperation”.

“ The basic principles governing the cooperation of IMF and RFAs include rigorous and even-handed surveillance; respect of independence and decision-making processes of each institution and regional specificities; ongoing collaboration as a way to build regional capacity for crisis prevention; open sharing of information and joint missions where necessary; specialization based on comparative advantage; consistency of lending conditions and conditionality, although with flexibility; respect of the IMF as preferred creditor; subsidiarity; avoidance of moral hazard; and transparency. “

Everything about the swaps and agreements are super strict and rigorous so no problems occur, only trading. 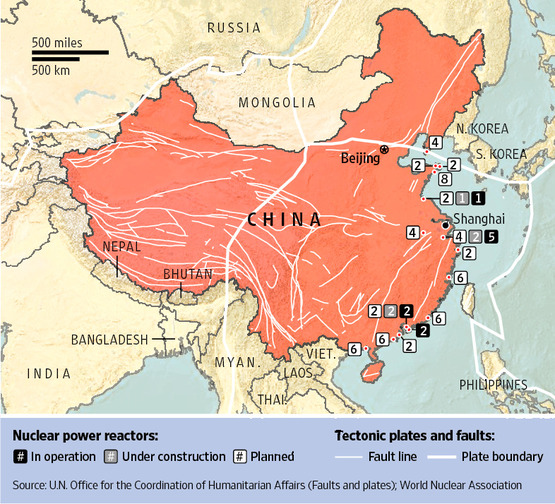 As you can see in the photo above, most of China is built on fault lines. They are also on 3 different plate boundaries. On plate boundaries is where the plates change, they either go under and over one another or collide over a very long period of time. These areas are very volatile which makes it a very dangerous place to lay an economy. Of course many nations take this chance because odds are that most of the earthquakes that can happen aren’t going to be very violent. China’s buildings weren’t originally built to withstand earthquakes, this includes their nuclear reactors and dams. Tens of thousands of people have been killed in China’s earthquakes.

Japan recently had an issue with a tsunami. The tsunami knocked out two nuclear reactors and Tokyo was on the verge of evacuating which, in of itself would have been a disaster. This would have also caused Japan to be a wasteland with many life deficiencies. There were about 20,700 deaths in this event. Many people were never found to confirm.

The insect above is a female Ades mosquito. it is the main cause of Dengue fever which attacks the white blood cells and kill off platelets.

In China and Taiwan the Dengue Fever takes the lives of many travelers who enter the country during times of epidemic, since there is no vaccination for it.  However when mosquitoes aren’t swarming. Parasitic ingestion through the consumption of undercooked meat or drinking water is probably the worst of inhabitants’ concerns and should not be overlooked. Some parasites can cause; abdominal pain, diarrhea, nausea and/or vomiting, stomach pain or tenderness feeling tired, weight loss and many others.